The Patients Health Care Survival Guide is a true story. It is a step by step diary of what happened to a healthy psychotherapist when she suddenly became ill and arrived at the emergency room of her managed care facility. Needing immediate medical attention, expecting to be reassured and to get her questions answered, she found herself trapped on a three trillion-dollar healthcare assembly line and abruptly sent home without treatment to await a further attack. Tied to a Primary Caregiver with a caseload of 2,000 patients and no interest or time to listen to her concerns, she was misdiagnosed, tested, retested, and assigned to impersonal salaried medical personnel she had never met who were unable to give her a definitive diagnosis. If she were to survive, she realized she must do something to save her own life. Recognizing that since she had never been a managed care patient, knew someone who was or who worked in the medical field, there was no way for the uninitiated to have any idea how patients were being treated. It was time to tell the truth. Join Dr. Wright on her fantastic journey through the looking glass. 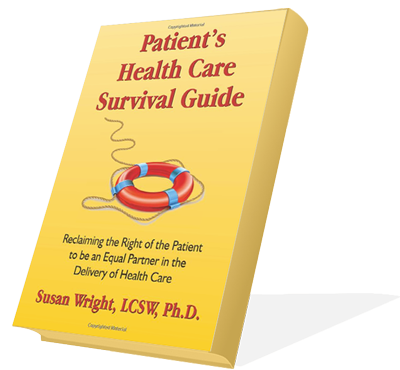 "10% of book sales go to our organization"

Join Us! We May All Be Patients One Day

Patients for Change United seeks to challenge the system by creating an interactive, replicable Bay Area website where like-minded patients and their supporters could organize, make their unmet needs public, expose the problems within the system, advocate for positive solutions and together become an irrepressible force for reform.

Lets Raise Our Voices In Unison

Dr. Wright and other like-minded supporters, many of whom had similar experiences, decided to form Patients for Change United and create a model, interactive, innovative and replicable website to bring patients and community supporters together in a common cause: Putting patients first. The site would include patient education and support programs, a gathering place where past and present patients and supporters would raise their voices in unison, create and design future programs and unite to find ways to advocate for change. The site is now a reality. Come visit us at PatientsForChange.org. Once millions of us are working toward the same goal, we will have become a formidable force for reform.

The Lown Institute
Founded in 2012, the Lown Institute is a leader in the fight for better and universal healthcare coverage. Each year policy makers, national leaders, activists, and dedicated attendees are invited to address the current state of healthcare in America and plan future action. In May of 2016 we were honored with a scholarship to attend.

The Right Care Alliance
Established by Lown in January 2017, the Alliance is the advocacy arm of the Institute. It is a grass roots coalition of patients, healthcare professionals, community activists, caregivers and families united in a set of common goals and shared visions of how to improve healthcare in America. Patients for Change has been a member of the coalition since its inception.

We Need Your Help